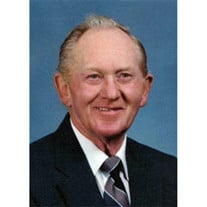 Lincoln, NE resident Roger D. Bauer, 92, passed away peacefully Tuesday, April 16, 2019, at The Windcrest on Van Dorn in Lincoln, NE. Graveside services will be conducted at 2:00 p.m., Tuesday, April 23, 2019, at the Sutton Cemetery in Sutton, NE with Rev. Mary Scott officiating. Military honors will be provided by the American Legion Argonne Post #61 of Sutton, NE. Visitation will be Monday, from 1 p.m. - 8 p.m., with the family greeting friends from 6 p.m. - 8 p.m., at Sutton Memorial Chapel in Sutton, NE. Memorial contributions may be directed to the Lincoln Children's Zoo or the Federated Church in Sutton, NE. Roger was born July 18, 1926, to Leslie and Frieda (Wahl) Bauer at his parent's home in Sutton, NE. Roger was baptized at English First Congregational Church in Sutton. He attended K-12 in Sutton and graduated in May 1944. He was active in scouting and lettered in football, basketball and track during his senior high years. Roger enlisted in the Navy immediately after graduation at age 17 and served in the Pacific Theater until his Honorable Discharge in 1946. After the war, Roger worked at his father's hardware store in Sutton. He married J. Jeannine Hultine September 18, 1949, at Saron Lutheran Church in Saronville, NE. This union was blessed with two sons, Charles and Craig. Roger later became employed at the Hastings Naval Ammunition Depot until its closure and finished his government career with the U.S. Veterans Administrations (Personnel Director) in 1984. Roger loved the Nebraska outdoors and loved to hunt, fish and golf. He was very proud of serving his country and passing his heartland heritage onto his family. Roger and Jeannine were happily married for 62 years and were always involved with their two sons, their parents and immediate family. Four grandchildren made everything complete. Roger was preceded in death by his parents, Leslie J. and Frieda C. (Wahl) Bauer; brothers and sister, Leslie J. Jr, Donna M., Gerold R., and Gene W. Bauer; and his beloved wife, J. Jeannine (Hultine) Bauer. He survived by his sons, Charles D. Bauer and wife Jane of Hastings, NE; Craig G. Bauer and wife Shelley of Lincoln, NE; grandchildren, Dustin C. Bauer and wife Kiley; Ryan C. Bauer and wife Gwyneth; Brady D. Bauer and wife Megan all of Lincoln, NE; Jessica J (Bauer) Klaassen and husband Justin of Salina, KS; five great-grandchildren; sister-in-law, Donna Bauer of Sutton, NE and a host of relatives and friends.

The family of Roger Dale Bauer created this Life Tributes page to make it easy to share your memories.

Send flowers to the Bauer family.