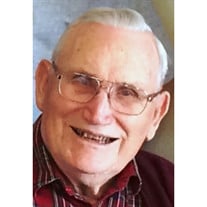 Rural Fairfield resident Royal Rodman Woods, 95, passed away Sunday, November 8, 2015, at Harvard Rest Haven in Harvard, NE. Funeral services will be 2:00 p.m. Friday, November 13, 2015, at the United Church of Christ in Clay Center, NE with Pastor Del Klover officiating. Interment will follow at the Fairfield Cemetery in Fairfield, NE. Visitation will be Thursday, from 1 - 8 p.m., with the family present from 6 - 8 p.m., at McLaughlin Funeral Chapel in Clay Center, NE. Memorial contributions may be directed to the United Church of Christ in Clay Center, NE. Royal was born August 10, 1920, at home near Fairfield, NE to Taylor and Ada (Kriutzfield) Woods. He married Beulah Jean East on September 24, 1944, and lived his entire life on the Woods family farm. Royal was a lifelong resident of Fairfield and graduated from Fairfield High School in 1937. He was a member of the United Church of Christ in Clay Center, a 4-H leader for the Sandy Valley Baby Beef Club, and served as a board member of the Clay County Medical Board, the Clay Center Co-op and a charter board member of the Fairfield Non-Stock Cooperative. Though Royal was injured in a farming accident in 1963, he continued to farm well into his 80's. He loved farming and was fond of saying that he never 'worked' a day in his life! His life reflected one of perseverance, strength, and generosity at it's utmost. He loved and treasured his family deeply, especially his wife, Beulah! He always had a story or verse to tell. Some were funny and some were full of wisdom but the most important story was the one his life told. It is a story of dignity, gentleness, and love and one that impacted everyone who heard it and knew him. He is survived by two daughters, Linda Remmenga of Grand Island, NE; Sarah & husband Mike Boeka of Blair, NE; son, David & wife Judith (Livgren) Woods of Fairfield, NE; nine grandchildren, Julia (Remmenga) and husband Solomon Everta of Eureka, CA; Paul and wife Susu (Pinter) Remmenga of Reno, NV; Adam Boeka of Blair, NE; Amanda (Boeka) and husband Nick Panos of Bolingbrook, IL; Jason and wife Jocelyn (Vallis) Woods of Sioux City, IA; Nicholas and wife Neha (Kabra) Woods of Papillion, NE; and Pamela (Woods) and husband Jonathan Spilker of Clay Center, NE; fifteen great-grandchildren; brother-in-law, Royce East of North Platte, NE and sister in law, Patricia (Hicks) Woods of Prescott, AZ. Preceding him in death were his wife, Beulah; his parents, sisters and brothers-in-law, Lola (Ray) Ells; Elma (John) Ells; Vera (Robert) Fuller; brother, Stanley Woods and sister-in-law, Erma (Williamson) East.

The family of Royal Rodman Woods created this Life Tributes page to make it easy to share your memories.

Send flowers to the Woods family.