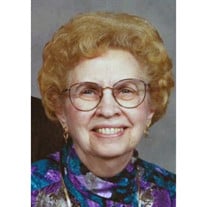 Sutton, NE resident Sedonia Irene Trautman, 91, passed away peacefully Wednesday, September 5, 2018, at the Sutton Community Home in Sutton, NE. Funeral services will be conducted at 11:00 a.m., Monday, September 10, 2018, at the Federated Church in Sutton, NE with Rev. Mary Scott officiating. Interment will follow at the Sutton Cemetery. Visitation will be Sunday, from 1 p.m. - 8 p.m., with the family greeting friends from 4 p.m.- 6 p.m., at Sutton Memorial Chapel in Sutton, NE. Memorial contributions may be directed to the family to be designated at a later time, or a donation can be made to the Alzheimer's Foundation in Sedonia's memory. Sedonia was born January 6, 1927, to John and Ida (Nuss) Griess on a farm near Sutton, Nebraska. She attended Sutton Public School and graduated in the class of 1945. After high school, Sedonia taught country school for 2 years then moved to Lincoln to work as a checker at Trixie's Food Market. She met her husband, Don, before he left for the service, and when he returned after the war, they married October 3, 1948, at the Federated Church. They were blessed with two children, Bruce Donald and Holly Irene. The family became members of the Sutton Federated Church. They farmed near Harvard for 10 years and then moved to the Saronville area in 1958. They lived on this farm until 1977, when they moved into Sutton and bought the same house that Sedonia's parents had lived in after they retired. Sedonia had a part-time job at Waddle's TV store to keep busy then worked at Rolfe's Seed Store for a while. She also volunteered at the Sutton Elementary school, was a member of the Matronette Extension Club, enjoyed quilting and embroidery, and attending the sporting events for the grandchildren. Sedonia is survived by her son and daughter-in-law, Bruce and Cheryl Trautman of Saronville, NE; daughter and son-in-law, Holly and John Sellgren of Cleburne, TX; grandchildren, Amanda and Tyler Goodwin of Abilene, TX; Kaitlyn and Cameron Allred of Fort Worth, TX; Jennifer and Merrill Friesen of Sioux Falls, SD; Melissa and Tim Scheidt of Omaha, NE; Tina and Ryan Kroemer of Waverly, NE; great-grandchildren, Bristol Goodwin; Blake Leckron; Caleb, Joanna, Levi Friesen; Thomas Scheidt; Kolbee and Keaton Kroemer; sister, Talitha Wach; and brother, Walter Griess. Sedonia was preceded in death by her husband, Don; parents, John and Ida Griess; brothers, Oscar and Rudolf; and sisters, Annetta, Linnea, Marie, and Neoma.

The family of Sedonia Irene Trautman created this Life Tributes page to make it easy to share your memories.

Send flowers to the Trautman family.