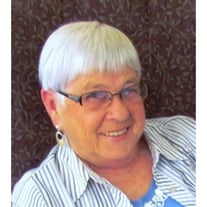 Former Fairfield resident, Sharon Kay Brodrick, 74, died Wednesday, December 10, 2014, at her home in Hastings, NE. Funeral services will be 10:00 a.m., Monday December 15, 2014, at Zion Evangelical Lutheran Church in Sutton, NE with Rev. Judy Nuss officiating. Interment will follow the service at the Fairfield Cemetery near Fairfield, NE. Visitation will be Sunday, from 1 p.m. - 8 p.m., with the family present from 4 p.m. - 6 p.m., at Sutton Memorial Chapel in Sutton, NE. Memorial contributions may be directed to the family to be designated at a later date. Sharon was born May 23, 1940, to Elmer and Hazel Layher in Lexington, NE. They moved to Grand Island where she graduated from Grand Island Senior High School in 1958. She was united in marriage to Francis Brodrick on April 3, 1960, in Grand Island, NE. They made their home for 35 years in Fairfield on the family farm, where they farmed and raised 3 children. She worked at Allen's for 3 years and later worked at Mary Lanning Memorial Hospital in the snack bar for 13 years before retiring. Sharon moved to the Regency Retirement Residence after Francis passed away in 2007. Sharon loved spending time with her family and friends, playing cards, and going to car shows with her 1968 Ford Mustang with her husband and brother, Lee. She is survived by her sister, Donna Schuneman of Chandler, AZ; son and daughter-in-law, Mike and Terri Brodrick of Fairfield, NE; daughter and son-in-law, Carol and Brian Sheridan of Sutton, NE; son, Rich Brodrick of Sutton, NE; grandchildren, Justin and wife Sydney Brodrick of Clay Center, NE; Megan and Chris Pierce of Grand Island, NE; Kiley and Scott Bazata of Kearney, NE; Chad Sheridan of Lincoln, NE; Allison Brodrick of Great Bend, KS; 3 great-grandchildren, Lakyn and Kinsley Brodrick; Bronson Bazata and numerous friends. She was preceded in death by her parents, Elmer and Hazel Layher; husband, Francis; 2 brothers; 3 sisters and nephews Jim and Gary Groetzinger.

The family of Sharon Kay Brodrick created this Life Tributes page to make it easy to share your memories.

Send flowers to the Brodrick family.