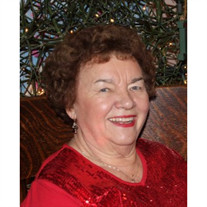 Former Sutton, NE resident, Shirley Ann Barnell, 79, of Lincoln, NE passed away Sunday, October 16, 2016, at Eastmont Towers in Lincoln, NE. Funeral services will be 10:30 a.m., Friday, October 21, 2016, at the Federated Church in Sutton, NE with Rev. Mary Scott officiating. Interment will follow at the Sutton Cemetery in Sutton, NE. Visitation will be Thursday, from 1 p.m., until 8 p.m., with the family present from 6 p.m., until 8 p.m., at Sutton Memorial Chapel in Sutton, NE. Memorial contributions may be directed to the ALS Association Keith Worthington Chapter. Shirley Ann Barnell was born November 20, 1936, in Geneva, NE to Ralph and Ruby (Ryel) Madison. She received her education in Shickley, NE and graduated from Shickley High School in 1955. On September 9, 1956, she married Merrill Barnell in Sutton, NE. She was employed as a homemaker and various other places in Sutton and Lincoln. She was a member of the American Legion Auxiliary Argonne Unit 61, Fillmore County Extension Club, Mad Hatters and the Women's Fellowship at the Sutton Federated Church. She is survived by her children, Linda Johnson of Lincoln, NE; Mark Barnell of Sutton, NE; Doug and wife Laurie Barnell of Dallas, TX; Brenda Barnell of Dallas, TX; 4 grandsons; 1 great-grandson; sister, Faye and husband Ken Barnell of Sutton, NE; brother, Bernard and wife Marilyn Madison of Lincoln, NE; and numerous nieces, nephews and friends. She was preceded in death by her husband, Merrill; her parents and a niece, Dawn Barnell.

The family of Shirley Ann Barnell created this Life Tributes page to make it easy to share your memories.

Send flowers to the Barnell family.