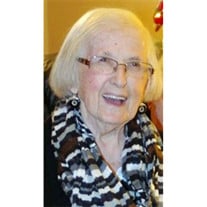 Clay Center resident, Shirley E. Bennett, 86, passed away Monday, January 23, 2017, at Brookstone View in Broken Bow, NE. Funeral services will be held at 2:00 p.m., Saturday, January 28, 2017, at Zion Lutheran Church in Clay Center, NE with Rev. Rob Garton and Rev. Rev. Bill Harrold officiating. Interment will follow at the Clay Center Cemetery. Visitation will be Friday, from 1 p.m. until 8 p.m., with the family present from 6 p.m. until 8 p.m., at McLaughlin Funeral Chapel in Clay Center, NE. In lieu of flowers, memorial contributions may be directed to Zion Lutheran Church in Clay Center, NE. Shirley Elizabeth (Meagher) Bennett was born on June 28, 1930, in Grand Forks, ND to Thomas F. Meagher and Evelyn P. (Johnson) Meagher. After graduating high school from East Grand Forks, MN, she took the Formal Teachers training and became a school teacher in a rural school where she taught 34 students by herself, 17 girls and 17 boys. She also traveled around with several jobs she held, at places including Washington, D.C., Douglas Aircraft in Long Beach, CA and worked for the Judge Advocate General's office at March Air Force Base in Riverside, CA, where she met her future husband Bob. After moving to Clay Center, she worked for Werner Construction, the Clay County Courthouse and eventually the U.S. Meat Animal Research Center where she retired after 15 years of service. Shirley married Bob Bennett on March 3, 1956, at March Air Force Base in Riverside, CA. To this union 5 children were born. Shirley was involved in many community organizations and clubs throughout the years. After retiring, she spent her time going to her grandkids events and enjoying their company. She will be remembered for being a great cook and feeding many visitors to their home whether they were hungry or not. One of her specialties she'll be remembered for are her banana bars. One of Shirley's greatest passions was taking care of her family. She was also an avid reader, with Erma Bombeck being one of her favorite authors. She was also a big Husker football fan. Shirley was preceded in death by her parents, two sisters and one brother. She is survived by her husband, Bob of Clay Center, NE; daughters, Barb (Steve) Snell of Guide Rock, NE; Diane "DeeDee" Bennett of Kearney, NE; Jerri (Fred) Knapple of Hastings, NE; and Sandy (Todd) Bitterman of Broken Bow, NE; son, Robert "Troop" (Paula) Bennett, Jr. of Sargent, NE. Also survived by her eight grandchildren, Mary, Casey and JayDee Snell, Chandra and Charmagne Bitterman, Kaitlyn and Lane Bennett and Libby Knapple. Also 3 great-grandsons, Jaxon, Braedyn and Reed Snell.

The family of Shirley E. Bennett created this Life Tributes page to make it easy to share your memories.

Send flowers to the Bennett family.