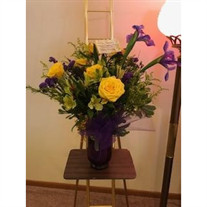 Velma J. Chapman, 96, died Monday, February 18, 2019, at The Heritage at College View in Hastings, NE. Funeral services will be conducted at 2:00 p.m., Monday, February 25, 2019, at McLaughlin Funeral Chapel in Clay Center, NE with Rev. Kevin Whitmore officiating. Interment will follow at the Clay Center Cemetery. Visitation will be one hour prior to the service on Monday. Memorial contributions may be directed to the family to be designated later. Mrs. Chapman was born July 3, 1922, to Daniel and Frances (Burghart) Godtel near Clay Center, NE. She attended Hedge Valley rural school near Clay Center, graduating from Clay Center High School. She worked various jobs, including a salesperson for a jewelry store. She married Donald R. Chapman on December 27, 1940, and lived in Elwood, NE. They divorced in 2006. Velma enjoyed her life growing up on the family farm southeast of Clay Center which her family homesteaded. She was proud of the family's fortitude of coming across the ocean from Germany to a better opportunity in the United States. She remembered the dust storms, doing various farm chores and helping with the farming operation in general. Her life on the farm taught her not to be afraid of hard work. She had fond memories of the house her father built for the family and how she assisted in painting the interior. She was proud of her parent's work ethics and generous nature and lived her life in the same manner she observed of them. While living in Elwood, she was a Sunday School teacher and she and her husband owned various businesses, one of which was a car dealership. The nephews and nieces have happy memories of getting to pick out which car they wanted to ride in to do errands with Velma, as there were always several parked around her house to pick from. She was nick-named, "Auntie", by her nieces. She was preceded in death by her parents; husband, Don; sister, Shirley DeHart and great-great-nephew, Brogan James Chapman. She is survived by nephews and nieces, James D. Chapman of McPherson, KS; Jacqueline (Tom) Jensen of Nelson; Jean (Greg) Stichka of Oak; and Jay (Charmain) DeHart of Stevensville, MT; 5 great-nephews and nieces, Cass Corman, Luke Chapman, Brock Corman, Jasmin Robinson, Bret Chapman, and 16 great-great-nieces and nephews. Velma's final years at the Heritage College View were a blessing to her and her family. She received excellent care and they treated her as a family member. Velma will be missed by a host of friends.

The family of Velma Jean Chapman created this Life Tributes page to make it easy to share your memories.

Send flowers to the Chapman family.