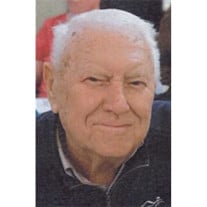 Sutton resident Virgil Ivan Johnson, 90, passed away Friday, September 11, 2020. Funeral services will be conducted at 10:30 a.m., Wednesday, September 16, 2020, at Hope Reformed Church in Sutton, NE with Pastor Scott Henry officiating. Services will be live-streamed on the Hope Reformed Church Facebook page. Graveside services will be conducted at 2:00 p.m., Wednesday, at the Harvard Cemetery in Harvard, NE with military honors by the American Legion Argonne Post #61, Sutton, NE. Visitation will be Tuesday, from 1 p.m. - 8 p.m., with the family present from 5 p.m. - 7 p.m., at Sutton Memorial Chapel in Sutton, NE. Memorial contributions may be directed to the family to be designated later. Virgil was born on January 29, 1930, on a farm by Saronville, NE, the son of Ivan and Esther (Trautman) Johnson. He graduated from Harvard High School in1947 and attended the University of Nebraska. In 1950 he enlisted in the U.S. Air Force. Virgil was stationed in England for three and a half years during the Korean Conflict. While serving in the military he met Doreen King of Leicester, England, and they married on February 21, 1953. They returned to the family farm near Harvard in 1954. Virgil spent 55 years farming and ranching on the family homestead. He was President of Harvard Development, member of the Harvard Methodist Church, American Legion of Sutton, VFW of Harvard, and Harvard Townhouse Corporation. He enjoyed traveling, playing cards with family and friends, watching sporting events, feeding cattle and going to the sale barn. Survivors include his wife, Doreen (Nadine); children, Timothy (Joan) of Harvard; Rodney (Lisa) of Sutton; Bradley of Harvard; Nicholas (Julie) of Sutton; Kelly (David) Landgren of Hastings; and Stacy (John) Connor of Lincoln; sisters, Sherol Stone of Sutton and Wanda (Don) Keller of Harvard; 14 grandchildren and 9 great-grandchildren. Virgil was preceeded in death by his parents, Ivan and Esther Johnson; son, Douglas; and brother-in-law, Bob Stone.

The family of Virgil Ivan Johnson created this Life Tributes page to make it easy to share your memories.