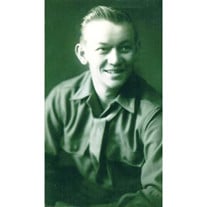 Sutton resident Wayne W. Erickson, 91, died Monday, April 28, 2014, at the Sutton Community Home in Sutton, NE. Funeral services will be 2:00 p.m., Friday, May 2, 2014, at the Federated Church in Sutton, NE with Rev. Harry Cross and Rev. Dr. Lee Wigert officiating. Interment will follow at the United Methodist Cemetery near Saronville, NE., with military honors by the Sutton American Legion Argonne Post #61. Visitation will be Thursday, from 1 p.m. - 8 p.m., with the family present from 4 p.m. - 7 p.m., at Sutton Memorial Chapel in Sutton, NE. Memorial contributions may be directed to the family to be designated at a later date. Wayne Erickson was born January 5, 1923, in rural Saronville, NE north of the Erickson-Percival Reservoir to Wenzell and Nellie (Nelson) Erickson. His mother died when he was ten days old. He spent the first part of his life with his Uncle Marvin and Aunt Effie Schultz. When he was older, he lived with his father near Saronville. He was baptized and confirmed at the Saronville United Methodist Church where he remained a member until its closing in 1991. He then became a member of the Sutton Federated Church. He attended rural school until second grade and then went on to graduate from Sutton High School in 1941. Wayne won the 103 pound Nebraska State Boxing Championship in 1941. Before he enlisted in the military, he farmed with his dad. He served in the United States Army from 1945 to 1947. He took basic training in Texas and then he was sent to Japan and served with the Headquarters Detachment, 14th Battalion. He received the Asiatic Pacific Campaign and World War II Victory medals. After his honorable discharge, he returned to Sutton, Nebraska. On June 1, 1947, he married Jeannine Ham and they moved to a farm north and west of Sutton. To this union, three children were born. He farmed and raised cattle until he retired at 65. Wayne and Jeannine moved to Sutton in 1975. After retiring, he was employed by Van Kirk Brothers. Wayne served as a member of the Sutton Public School Board in the mid 1960's. He always enjoyed sports and helped with the American Legion Baseball team for several years. He was a lifetime member of the Sutton American Legion Post #61 for over 60 years and was a past Commander. Wayne was preceded in death by his father and mother, Wenzell and Nellie Erickson. He is survived by his wife of 66 years, Jeannine (Ham) Erickson; son, Dr. Gerald Erickson and wife, Carol (Ulmer) Erickson of Sutton, NE; daughter, Sherry Ebert of Sutton, NE; son, Kevin Erickson of Breckenridge, CO; two granddaughters, Miki (Ebert) Hajny and husband James of Glenvil, NE; Stacy (Erickson) Schutte and husband Troy of Elkhorn, NE; two grandsons, Corey Ebert and wife Traci of Saronville, NE; Kyle Erickson and wife Dana of Kansas City, MO; eight great-grandchildren, Dillon, Caden and Ella Schutte; Jace Hajny; Kellen, Kierra, and Brooks Ebert; and Jake Erickson. He dearly loved his children, grandchildren, and great-grandchildren. Wayne will always be remembered for his generosity (especially during sweet corn season).

The family of Wayne W. Erickson created this Life Tributes page to make it easy to share your memories.

Send flowers to the Erickson family.