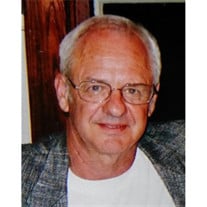 Sutton resident William D. "Bill" Bergen, 72, passed away Thursday, August 21, 2014, at his home in Sutton, NE. Memorial services will be 10:30 a.m., Monday, August 25, 2014, at the Federated Church in Sutton, NE with Rev. Harry Cross officiating. Book signing will be Sunday, August 24, 2014, from 4 - 8 p.m., with the family present from 6 - 8 p.m., at Sutton Memorial Chapel in Sutton, NE. Memorial contributions may be directed to the family to be designated at a later date. He was born October 13, 1941, to Henry H. and Sophia (Friesen) Bergen in Sutton, NE. Bill attended Sutton Public School and graduated with the class of 1959. He went on to Nebraska Wesleyan University and graduated with a B.S. in Business Economics. He married Paula L. Schneider on August 22, 1965, at the Federated Church in Sutton, NE. He was a lifelong member of the Federated Church. Bill returned to Sutton following college and began working at the family business. Bill worked for 42 years as an auctioneer, appraiser, and broker. Throughout his career as an auctioneer he had many partners in the auction business. Not only did he work with his father, but also with Dale Hanna, Dan Whitley, Dean Dirks, and Larry Garland. He also worked with his brother Max in the Real Estate business until the time of his death. He cried his last sale on July 26, 2014. Bill was an avid sports fan. He truly enjoyed watching his children, niece, nephews, and grandchildren participate in a variety of activities. He also loved to fish, hunt, and play golf with friends. He enjoyed nature. He loved birdwatching, and checking his many bluebird houses. He also enjoyed his Boston terrier. In September of 2010, Bill was diagnosed with pancreatic cancer. He maintained a positive outlook and endured many rounds of chemotherapy. He continued to be interested in everything, but had to give up some his more active hobbies. He always enjoyed spending time and visiting with friends. He is survived by his wife of nearly 49 years, Paula of Sutton, NE; son, Jed and wife Heidi Bergen of Sutton, NE; daughter, Kim and husband Jason Cooper of Hickman, NE; grandsons, Wyatt and Jesse Bergen of Sutton, NE; grandson and granddaughter, Jack and Avery Cooper of Hickman, NE; sister, Wanda and husband James Hartley of Frederick, MD; brother, Max and wife Julie Bergen of Sutton, NE; uncle, Eugene and wife Lu Bergen of Lushton, NE; nephews, Mitch and wife Carrie Bergen of Lincoln, NE; Jake Bergen of Lincoln, NE; David Hartley of Philadelphia, PA; nieces, Anne Hartley of Chicago, IL; Claire Bergen of Lincoln, NE and numerous cousins. He was preceded in death by his parents.

The family of William "Bill" Bergen created this Life Tributes page to make it easy to share your memories.

Send flowers to the Bergen family.