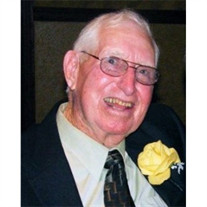 Sutton resident, William "Bill" Patrick Sheridan, 92, passed away Tuesday, August 8, 2017, at the Sutton Community Home in Sutton, NE. A Rosary will be prayed at 7:00 p.m., Thursday, August 10, 2017, at St. Mary's Catholic Church in Sutton, NE. Mass of Christian Burial will be held at 10:00 a.m., Friday, August 11, 2017, at St. Mary's Catholic Church in Sutton, NE with Father Michael Zimmer officiating. Graveside services will be held at 1:00 p.m., Friday, at Calvary Cemetery in Sutton, NE. Visitation will be Thursday, from 1 p.m. - 5 p.m., at Sutton Memorial Chapel in Sutton, NE. Memorial contributions may be directed to the Sutton Community Home Foundation or St. Mary's Catholic Church. William "Bill" Patrick Sheridan was born and raised in Sutton. He was the 3rd of 7 children born to William Michael and Margaret (Hogan) Sheridan of Sutton. Bill graduated from Sutton High School with the class of 1943. After graduation, Bill worked alongside his father and brothers selling Massey Harris and Allis-Chalmers at the Wm Sheridan & Sons dealership. Bill served in the Navy for two years during WWII in the Pacific. He was on an escort carrier and a seaplane tender in the engine room. Upon returning home from his service to our country, Bill began farming. At the age of 31, Bill married Donitta Schriner of Hastings. They met at a dance and enjoyed many years of dancing together. They were united in marriage on October 22, 1955, at St. Cecilia's Catholic Church in Hastings, NE by Father James Dawson. Bill and Donitta were married for 61 years. To this union, they had 4 children: Mary Margaret, Mark, Brian and Julia. They raised their family on a farm just outside of Sutton. Bill built the home that he and Donitta raised their family in and it has survived 3 tornados. Bill raised milo, corn, wheat, soybeans and raised and fed cattle for many years. Bill was a 4-H leader for his children's horse club, a den leader for his sons Boy Scouts group, a member of the Tri County Rounders Saddle Club, a lifetime member of St. Mary's Catholic Church, Knights of Columbus, and was a 70-year member of the American Legion. Bill and his son Mark enjoyed breeding, raising and training Quarter Horses. With the partnership of his son Brian, he continued to be active in farming up until the age of 86, with harvest being his favorite time of the year. In his semi-retirement years, Bill and Donitta enjoyed traveling to Arizona, attending Husker basketball games, going to auctions and watching their grandchildren's activities. He rarely missed 8 a.m. coffee time at Tubbies. He enjoyed working in his shop - fixing, repairing or welding. At the end of the day, Bill could be found relaxing in his shop or sitting on the patio with his dog, enjoying a cold Budweiser while watching his birds. As Bill lost his mobility, he moved to the Sutton Community Home in December of 2013. With the help of caregiver and friend Shirley Horst from Home Instead, he continued to go out to the farm 3 days a week and remained involved in the farming operation. Bill is survived by his devoted wife of 61 years, Donitta of Sutton; daughter, Mary Margaret Hobelman (Mike) of Lincoln: sons, Mark of Cave Creek, AZ; Brian (Carol) of Sutton; daughter, Julia Rodehorst (Rex) of Kearney; 8 grandchildren, Shiloh (Kylee) Hobelman, Joe (Jill) Hobelman and Abbie (Travis) Lamb all of Lincoln; Hayden Sheridan of Atlanta, GA; Kiley (Scott) Bazata of Kearney and Chad Sheridan of Atwood, KS; Afton (Wade) Christen of Anselmo and Shawn Rodehorst of Kearney; 5 great grandchildren, Bronson and Brooks Bazata, Ella and Crosby Lamb and Logan Hobelman with another great-grandchild expected in September of this year. Siblings, Roger Sheridan of Sutton; Ellie Tershy (Russ) of Santa Cruz, CA; Regina (Max) Leininger of Sutton; Johnny (Barb) of Sutton; Peggy O'Connell of Urbandale, IA. Sisters-in-law, Bea Jackson of Riverton, NE; Ardyce (Carl) Eilert of Beloit, KS; brother-in-law, Ronald Schriner of Cowles, NE and numerous nieces and nephews. He was preceded in death by his brother, Tom and wife Pat Sheridan; sisters-in-law, Betty Sheridan; Irene Schriner; brothers-in-law, Bob Schriner; Allen Jackson and Patrick O'Connell. Bill never knew a stranger and always wore a smile. He was proud of his Irish heritage and loved a good story and joke.

The family of William Patrick Sheridan created this Life Tributes page to make it easy to share your memories.

Send flowers to the Sheridan family.